A space for selling and coaching, from every angle. 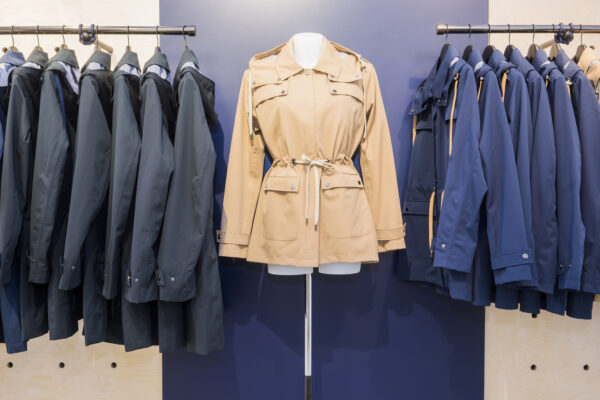 Combining the performance of a sports parka with the chic of a city trench: this is the successful challenge of ĀPA-Intemporal, a rainwear brand made in Europe and created by the minds of Brussels. A baptism of water for the brand, creator Léa Stein was offered temporary occupation of a sales outlet just a stone’s throw from the European institutions: L’Auberge Espagnole.

Franco-Belgian Lea Stein combines Parisian class and an audacity that could only originate from Brussels. After having worked for luxury brands such as The Row, Dax Gabler and Lanvin in New York and Paris, the designer set herself a challenge in topstitch: combining haute couture and innovative technologies.

For 18 months, the young entrepreneur visited the highest-grade factories and European suppliers, perfecting the creation of a brand, APA-Intemporal, and tailoring a raincoat straight out of the future. What was lacking was a physical location, however, to take her product from the second to the third dimension.

Expertise and experience on the shelves of the Auberge Espagnole

It was through the Berlin designer Bojana Draca, creator of Farrah Floyd, that Léa first heard about the Auberge Espagnole. She then submitted her application form and in May 2019, ĀPA-Intemporal smart raincoats filled the rails of the hub.brussels business incubator. 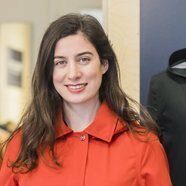 We needed a physical experience to develop our  fashion tech brand. The Auberge Espagnole allowed us to achieve this!  The various coaching sessions have been very qualitative and have filled our gaps and strengthened our concept.

After an exclusively online presence, running a shop, could have disarmed Léa. But thanks to the various coaching offered by hub.brussels, these constraints slid off the ĀPA-Intemporal creator like the water off her raincoats.

The designer is now working on developing her brand abroad, in the form of permanent stores. ĀPA-Intemporal is a company facilitated by the hub.awards2019, which reward audacious and innovative companies in Brussels. Winner of the EXPORT prize for goods, ĀPA-Intemporal will benefit from a series of coaching and export subsidies.

A shop in Berlin? A pop-up on Avenue Louise? Léa’s head is full of ideas…and her parka pockets full of opportunities.

Since then, APA-Intemporal’s raincoats have been on the catwalks of London Fashion Week, Brussels Fashion Days, Antwerp Tech Fashion Work and on many TV shows.

Faced with the coronavirus, the brand had to adapt: rather than settling in a dedicated space, APA-Intemporal will invite itself in September 2020 in the windows of The Canvas in Antwerp and … Manhattan! A crossing of the Atlantic, for a brand that is not afraid to get wet.

A reversible winter coat? An elegant thigh protector for cyclists? Share with Léa your upcycling ideas for the valorization of her nanotechnological fabric scraps!

Like Léa, you would loke to test your products and see them stand out in a shop window? Join our business incubator!

100 ideas to do business in Brussels

Thanks to the sponsors of L’Auberge espagnole: