A reflection of success.

A world leader in the chemical industry, Belgian group Solvay employs over 24,500 people in 61 countries and represents the best in research and innovation. So, surely the appearance of its headquarters should live up to the brilliance within? 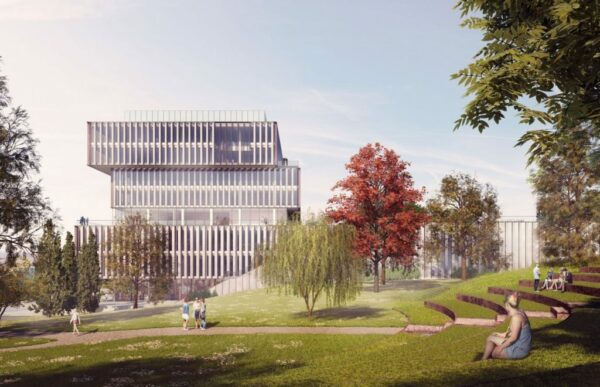 The Solvay group is not short of ideas These ideas needed a fertile environment in which to germinate, and enough space to take root. The company therefore decided it was time to overhaul its headquarters in Neder-Over-Heembeek, creating a new research and innovation centre and welcoming new entrepreneurial and academic initiatives to its Neder-Over-Heembeek site.

The idea was to create a prestigious and accessible campus for visitors and employees alike, with clear signage, reasserting Solvay’s roots in Brussels. This gargantuan project called for specialist support.

A regional round table

hub.brussels organised various meetings in order to gather all regional stakeholders involved in the project around one table.

A Project worthy of 22 hectares

The future Solvay headquarters reflect the company: ambitious and innovative.

The plans, drawn up by the consortium consisting of Danish architecture practice Schmidt Hammer Lassen Architects and Belgian firms Modulo Architects and VK Engineering, bring all employees together in a single building, fostering cooperation and co-creation.

The vast windows are a glittering reflection of a small family business which, over the course of 150 years, became a world leader in advanced materials and specialist chemicals.

Without hub.brussels, the formalities with the local government in Brussels could have been our undoing…Simon, our contact at hub, easily assumed the roles of mediator, facilitator and coach. hub.brussels provide discreet but incredibly effective support, which has saved us precious time by putting us in contact with the right people, throughout the project.

A self-build company with solid foundations.

An augmented escape from reality.

The start-up that puts its algorithms and artificial intelligence at the service of public health and mobility.

The start-up that takes care of others by bicycle.

An e-reputation platform whose reputation is well known.